A picturesque village sits perched on a promontory at the northern end of Sardinia, looking out over the Strait of Bonifacio, a famous and popular tourist destination.

The sea is the undisputed star at Santa Teresa Gallura, a town of about 5,000 inhabitants that in the summer swells to include tens of thousands of tourists who enliven it with aperitifs in chic bars and live music. It looks out over the rocky shore of Bonifacio and was founded in 1808 by King Vittorio Emanuele I of Savoy on the site where the village of Longosardo (or Longone) once stood, then renamed after his wife, Maria Teresa. The town’s edge follows that of two inlets: Porto Longone to the east, where the tourist harbour is, and the bay of Rena Bianca to the west, a stretch of ultra-fine, brilliantly coloured sand located just a short walk from the town’s main square. The crystalline waters here sparkle with a thousand hues, proud recipient of the FEE’s Blue Flag of excellence. Above it rises the historic Longosardo Tower, built at the behest of King Philip II of Spain in the XVI century. There are a variety of other lovely beaches for you to enjoy: the wide La Marmorata, the picturesque Cala Balcaccia and Santa Reparata, known for its particularly clean water and rocky shore, ideal for diving. Heading westwards you’ll come across Capo Testa, the northernmost extremity of Sardinia. Along the isthmus that links the peninsula-promontory to the island are two gorgeous beaches: Rena di Ponente and Rena di Levante. Depending on how the wind is blowing, you can enjoy a calm sea at one or the other. From the western beach you can reach Capicciolu (or the “Beach of Auntie Colombo”) covered in warm golden sand. Here (perhaps) ancient Tibula (and its harbour) once rose, the docks from which ships laden with granite to adorn the palazzos of ancient Rome departed. At the western edge of the cape is the spectacular Cala Lunga – Valle della Luna, the symbol of Santa Teresa Gallura: hidden coves protected by high granite walls shaped by nature. It is the setting for the magical Musiche sulle Bocche music festival, even more beautiful in the soft light of the full moon. When you head towards Palau you will find the natural granite pools of the Valle dell’Erica, the long Porto Liscia-Sciumara, where surfing reigns supreme, and the enchanting peacefulness of the Conca Verde. The splendid copper dome of the XX century church built over the remains of a smaller medieval one glimmers in a romantic stand of pine trees three kilometres out of town. Don’t miss the Batteria Ferrero, the remains of a WWII fortress compete with artillery positions, bunker, garrison and mines. The most interesting remains, however, are the Nuragic ones: Lu Brandali and sa Testa. 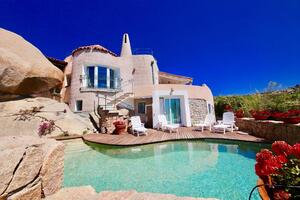