The State forest of Castiadas is found in the region of Sarrabus and in the municipal territory of Castiadas and San Vito and covers an area of 125 hectares.

The area is constituted by two separate parts, one of irregular form, the other polygonal, about 200 m away from the State forest of Sette Fratelli. It has formed part of the Nature Park of Sette Fratelli – Monte Genis since 1999. The forest is recognized as a site of Community Importance of Sarrabus for its particular condition of natural habitat for wild flora and fauna. The area, morphologically characterised by granite, is covered by holm oak and cork oak forests, and is crossed by a number of watercourses, Riu Buddui, Riu Spegu, Riu de Is Matanas, Riu Su Ganci, which are all seasonal. The forest is 123 m above sea level at Su Sganciu and 726 m at the Punta Su Spegu. 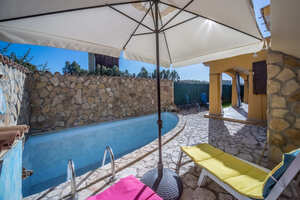